Skip to navigation Skip to content
18
- November
2010
Posted By : Thomas Gilmore
No Comments
Enough Seriousness, What’s in Your Cabinet?

Some Food for Thought 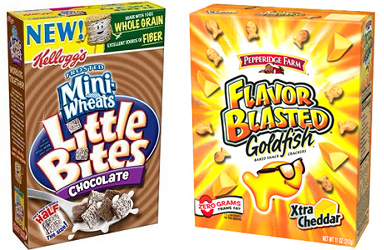 So, the branding and marketing community spends a great deal of time creating processes, and procedures. We evolve research methodologies and innovation philosophies and practices, but what about the real world? When was the last time you

took a look around your own world for a spark of creativity?

To paraphrase the current Capital One campaign, What’s in Your Cabinet?

Have you ever looked a little closer to home for some innovation? Could the world’s next big idea or simple co-branding opportunity be lurking behind a box of crackers or under your bathroom sink? Can you learn anything from analyzing your own unique habits as closely as you’ve followed an afternoon of focus groups?

I have three kids and we eat a lot of ice cream—a lot of ice cream. Probably three to five 1.5 quarts a week (remember, not so long ago when ice cream was sold by the half gallon?). We especially like Turkey Hill’s Limited Edition Double Dunker (but its limited and no longer available near us). At any rate, I digress…

Two great tastes that are surprisingly good together

Some days we don’t have any ice cream on hand and the kids are still looking for something sweet after dinner or just before bed (you know the drill, during homework and TV time). So, tonight was one of those nights. I walked into the room and everyone was eating Kellogg’s Frosted Mini-Wheats Chocolate Little Bites and Pepperidge Farm Flavor Blasted Goldfish Crackers. Now I’ve had Chex mix, trail mix and just about every kind of snack mix known to man, but this was new and different. Just the right mix of salty and sweet…and flavor blasted Xtra Cheddar cheese (don’t forget the flavor blasted cheese).

Now I’m not sure about you, but the last time I threw down some items like that was probably fifteen years ago, maybe even twenty. There was a lot of experimentation in the kitchen when I was an undergrad (but that’s another story altogether, from mostly late at night).

Well, what did I learn? Maybe not too much. I’m not going to write to Kellogg’s or Pepperidge Farm with the idea (you’re welcome to if you like). I’m not going to share the recipe of specific cups of this to just a bit of that. But I am going to remember to observe life and try to observe the little things. Sometimes that’s what sparks the next big idea.

Just another reason its good to have kids and to think about your own world.

So, what’s in your cabinet?